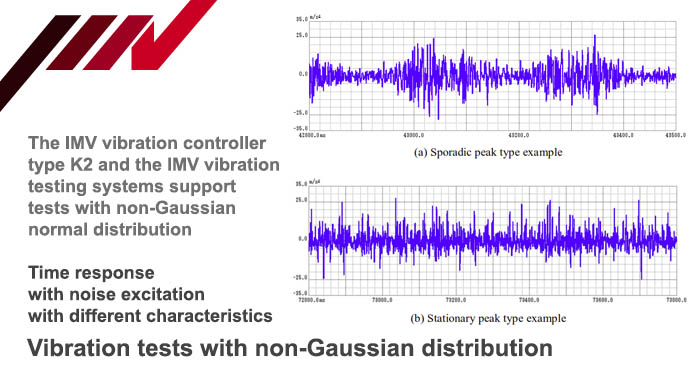 IMV provides training in the new test method
Body, chassis and the interior of vehicles are constantly exposed to dynamic stress. The performance and stiffness of the components are tested in product tests and simulated transport situations under real-life conditions.

So far, the tests frequently were performed with noise excitation for which the normal Gaussian distribution was applied for the amplitude frequency. Now IMV vibration test systems can also be used for non-Gaussian vibration tests.

This is made possible by new software which in addition to the conventional features for the traditional noise excitation includes two new parameters: kurtosis (“peakedness“) and skewness.

Real peaks are often higher
"The purpose of the non-Gaussian method is to adapt the signals used for excitation in the lab to real-life conditions as much as possible in order to obtain identical stress.”

It goes without saying that the test results depend strongly on the type and method of the mechanical stress produced in the lab environment.

“Measurements during vehicle tests have shown that, in practice, peak vibrations are often higher and the frequency of the amplitudes follows a different distribution.“ Dipl.-Ing. (FH) Martin Engelke, Marketing and Sales Manager IMV

Non-Gaussian distribution supplies more realistic picture
Formerly, sine signals were often used. In the last few years, noise excitation has made ever deeper inroads in the realm of vibration testing because it provides a truer picture of the real stress. The noise excitation is based on normal distribution. For some time now, the non-Gaussian distribution has been preferred. It is important that the test engineer has a good understanding of the nature of the signals. He must take the protection of the test specimen from extreme peaks and the protection of the vibration testing system into account as much as the properties of the non-Gaussian amplitude distribution. In contrast with the uniquely described noise excitation with normal distribution (se, e.g., DIN EN 60068-2-64), these properties are more varied.

Both values are specified as integers.…

AMtest-TM Kft has successfully obtained EN ISO 9001:2008 certification, an event that has brought significant value to the life of our firm. More