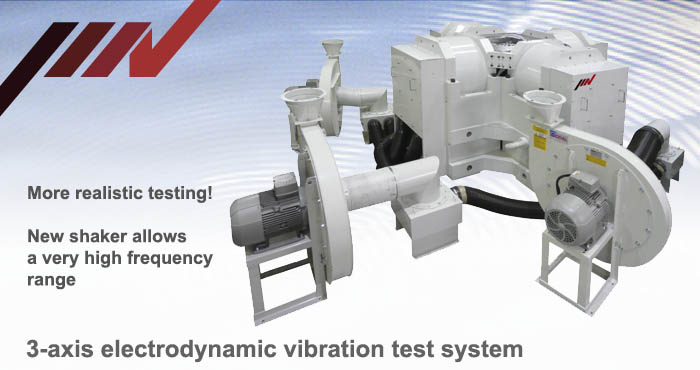 This Summer, IMV has installed and makes available an electrodynamic 3-axis vibration test system for the first time in Europe. This 3-axis shaker can be used for tests with simultaneous excitation at up to 2,000 Hz in 3 axes. ”Servohydraulic systems have been used for these tests for a long time“, Martin Engelke, Marketing and Sales Manager IMV Europe, explains. ”Excitation in 3 axes is new for electro-dynamic systems in Europe.“  It is so new that test standards are not yet in place.

The 3-D shaker is constructed as follows: Three vibration test systems are orientated at right angles to each other and linked by a vibration table and a base. With this arrangement, a complex vibration motion can be reproduced simultaneously in 3 axes. The special feature is that tests can be performed over a very high frequency range. Whereas hydraulic excitation is typically in the lower frequency range of up to 150 Hz, the electrodynamic 3-axis shaker can test at frequencies up to 2 kHz.

Single-axis electro-dynamic vibration test systems have been the systems of choice for many years as many components need to be tested over a frequency range up to at least 500 Hz.

Electro-dynamic vibration test systems work on the same principle as a loudspeaker: A coil through which a current flows is placed in a magnetic (stator) field and is free to move along its axis. When current flows in the coil, a magnetic field is produced which – like the two poles of a magnet – causes the coil to be repelled or attracted by the stator field. The strength and the direction of the force are proportional to the current flowing in the coil.

Unlike hydraulic systems, only electrical energy is translated into movement; there is no equivalent mass of hydraulic fluid to be moved. Typical of electrodynamic vibration test systems is their very high linearity so that signals of low distortion and good reproducibility can be obtained, even at high frequencies.

Testing using 3-axis technology has the advantage that the mechanical effects of the environment on a structure can be reproduced more realistically.  It is not always possible to reproduce real-world vibrations by testing in each axis sequentially.  Even in those cases where it is, three-axis testing allows the test to a performed far more quickly.

Successive simulation is out

Tests in the past using a single-axis system were limited to the expected acceleration in each direction, i.e., the accelerations expected during the use of the product were simulated successively in the three orthogonal axes. The interaction of vibrations in the three axes under different phase relationships cannot be reproduced by sequential testing. This is different when all 3 axes are excited simultaneously. Now, the stresses imposed by a complex three-dimensional vibration can be generated in the lab.

Many automotive tests specify an extended test time for each axis.  Such tests can take up an extremely long time when each axis is tested individually, and set-up and change-over times are added in.  Testing using a three-axis vibration test system requires setting-up only once, and takes one third of the test run time.  For example, a test taking 96 h (4 days) for one axis works out to take as many as 12 days for testing all 3 axes. Add to that the time for set-up and set-up changes and it can take as long as 3 weeks until the first test results are available. The simultaneous testing in all 3 axes saves two of the 3 weeks. This is a significant benefit in a world of ever-shorter development cycles. Error sources are also reduced with this complex type of set-up because the test system is set up only once – instead of three times.

AMtest-TM Kft has successfully obtained EN ISO 9001:2008 certification, an event that has brought significant value to the life of our firm. More